Last night my son, Nathan, took me to a ballgame.  He bought my ticket and we enjoyed a victory by the Cleveland Indians.  We shared the moment just like we did when I took him to his first ballgame he was five. It was a great night… but not because of the Indian’s victory and it wasn’t great because it was “dollar dog night” or because there were fireworks after the game.

Father’s Day is tomorrow. If you haven’t already, you’ll be spending this afternoon running to the mall in search of the perfect present.

On behalf of all fathers, I’d like to deliver a message to anyone who has a Dad or is married to one. It might be the thought that counts, but you can’t wrap thought up in a box.

So let me give you some advice… if you are looking for the perfect gift and you find yourself in the tie department at Macy’s, hating yourself along with the rest of tie-giving children of  father’s like me. It’s time to realize it’s too late, futile and time to give up.

Your father doesn’t want another tie.

If he wants to read a book, he’ll buy it.  He doesn’t need another shirt, but if he did, he’d go get one. There’s not much he wants that he can’t get on his own.  But there’s one gift he longs for that you alone and only you can give – and you won’t find it at Brookstone.

Let me let you in on a little secret…

Then one day, hopefully sooner than later, if  you’re lucky, you will come to realize that the mark that he wanted to leave in this world …was you. You are his legacy. You are his reason why. You’re directly tied to his purpose…and therefore, his self-worth as a father.

So you won’t find what he wants at the mall.

Want to make this the best Father’s Day ever?

Tell your Dad you love him. Don’t write it down. Just tell him directly, with your own voice and not through a  Hallmark card.  Speak from the heart.  Make a moment of it. Thank him for the work he’s done and the sacrifices he’s made for your sake. Thank him for the best of what he’s planted in you however sm

all or big that may be.  And maybe once again in his life he can feel the cape of Superman around his neck.

I am no different from these other fathers.   Along with my wife, I have raised four children and if the walls of our home could speak they would tell a story of the struggle of a blended family trying to make it work.  It wasn’t perfect and I made mistakes and there were times when life was hard on all of us.

But I have a special gift that I carry with me everyday and that gift is clearer in my memory on each and every Father’s Day.  That special gift is the memory of when my children have used their own words and looked me in the eye and told me they loved me.

So last night, after the game, when I dropped my son off at his apartment just o 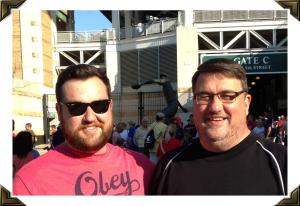 utside of Cleveland.  He looked me in the eye and told me he loved me… I received the best gift I could ever receive for Father’s Day. He gave me a gift only he could give…one that did me a kind of good I can’t even fully explain. Words fall short but for the moment I could feel the cape around my neck once again.

This year, give the Dad in your life something they can’t give themselves. Tell him you love him…with words you’ve never used before.

On behalf of all fathers, I can assure you, there’s no greater gift than to give him another opportunity to wear the cape once again.

I’m simply a guy with a head full of thoughts, a computer and a blog program. Nothing more... nothing less. View all posts by David Michael Lee

One thought on “Love Your Dad? Ditch the Tie”

We see ourselves one way. Our family and friends see us another. Co-workers see us in a different way. People out in the community see us another way. Different perspectives and perceptions of how people see us. Most of the time… well almost every second of the time it is not what God sees in […]

Love is powerful. It’s complicated. And messy. Love is the way. It is the only way. But if you insist on a quick fix that will show immediate results, you’ll give up on this love business in a heartbeat. This is why Jesus included what seems to be an incongruous lesson in his love curriculum. […]

So… you are making a cake. You mix the ingredients perfectly. It is going to be delicious. And then, at the last second, you throw in a bottle of vinegar. And in that one decision, the rest of that tasty goodness is undone. All of your good instinct and effort is still there. It looks […]

It is impossible to fight darkness with more darkness. Only light will work. We do not need to be philosophers, or saints, or sages to own this truth. And we do not need to walk on water, or hot coals, or even air. We need only shift our awareness to see from a different perspective, […]

Believe it or not, the headline reads, “Runners Pant Less” Find it… on page 120 of the 1976 Oak Harbor yearbook. I never noticed the headline before, or if I did I must have erased it from my memory. Either way, over forty years later, there it was and the truth of it could not […]